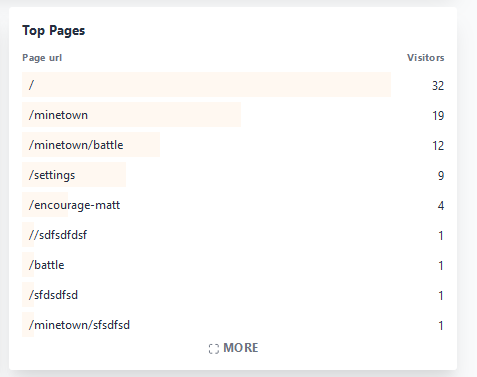 One underrated thing about making games for the web is how many options you have for tracking traffic and in-game events. Probably the most commonly used option is Google Analytics, which has the advantage of being free and allowing both URL tracking and sending custom events.

However, there are a few downsides of Google Analytics (GA), one major one being that GA collects a lot of data on your players, perhaps more than you intend to collect. Mainly for that reason, when choosing a service to do event tracking for Matt Fantasy VI, I decided to go with Plausible.io, which is a much simpler, more privacy focused alternative to GA. While Plausible is not free (after a trial), I felt it was worth giving a shot.

Plausible’s tutorial goes over the basics of getting started with tracking, but the main thing I want to get across is that I have two ways of tracking how someone is progressing in my game:

Re: URLs: In Matt Fantasy, menus and levels each have their own path (e.g. the first level is https://www.mattfantasy.com/minetown), which will be tracked automatically by Plausible (as you’d expect by any website analytics service).

Re: custom events: To know that people are reaching a specific point in the game, I wanted to fire off events to Plausible after various in-game events occur (e.g. when the first cinematic ends, the first battle ends, etc.). Fortunately, custom events like this are possible in Plausible, if not quite as automatic to set up as URL paths. Now that I’ve got a few custom events created, I was able to create some goals in Plausible:

The only downside is that Plausible shows me how low my game traffic is right now… maybe a topic for another day.

To round it out: Tracking game events on the web is pretty straight forward, especially if you take advantage of analytics services automatically tracking changes in URL paths. Google Analytics is probably the most robust free service available, but player privacy may be a concern. After doing some research for Matt Fantasy VI, I ended up going with Plausible.